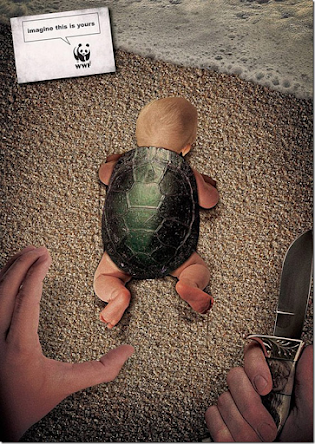 Probably the above quote fits more than true in the COVID times as the way humans have ruthlessly killed the wild animals and destroyed forest in the same way nature also rewind human life. To sensitize people toward wildlife and environment preservation, organizations like World Wide Fund (WWF) for nature have been working since 1961.

WWF is the world's largest wildlife and nature conservation organization, with over 5 million supporters worldwide, working in more than 100 countries, and supporting around 3000 conservation and environmental projects. These numbers would have been easy to digest if I would have talked about World Wide Wrestling(WWE) but for the conservation of wildlife and nature, an organization needs to do something more. And that more, in this case, is coming up with a creative marketing strategy in order to get such a huge supporter worldwide.

The Panda logo which originated from a panda named Chi-Chi, an endangered species was an ideal candidate to become the logo of the WWF since 1958. The logo was strategically used to cross all sort of language & culture barriers and gave WWF a strong brand recall value. 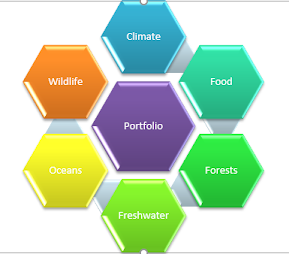 WWF work is directed around the above 6 goals and having an integrated approach to all these goals makes sure it protects vulnerable flora and fauna across the world.
WWF targets people from different demographics by understanding that different channel appeals to people in a different way. For example, the younger generation might engage by participating in events such as Dinner in the dark, candle-lit paint night on the other hand older participants engage by donating charity via website or email signups. WWF though target global issues but in order to influence the local people, it presents content at a local level to be more relevant to the people.

WWF's most successful event is Earth Hour which is held annually on last Saturday of March from 8:30 PM to 9:30 PM encouraging people to turn off non-essential electric lights. Back in 2012, WWF advertised a Blackout banner across Norway's top media sites targeting the tech-addicted generation. A single tap on the banner mobile screen goes black and finger swiping of the black screen reveals the Earth Hour Count down. Campaign positioning was to show that fighting climate change is easy. This campaign receives 10 million impressions and WWF won the MMA Global mobile marketing award in 2012.

WWF uses micro-influencers in order to reach a wider audience and increase the participation of people.

There are many engaging campaigns like Give A Hand To Wildlife, The Future Is Man-Made, Its Your Turn. Among those, the #lastSelfie was nothing less than a tsunami where the actual campaign was targeted over Snapchat but it also got cross shared on Twitter and reached 50% of Twitter users in 2015. 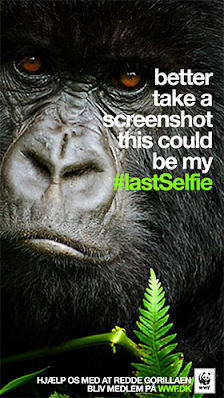 Guerilla vs Mobile
Guerilla marketing is a strategy where a brand gets more creative and adds a surprise element for its targeted customers which lefts an ingrained impression of the brand in the customer's mind. It is a marketing strategy where the targeted audience physically experiences your marketing ad. 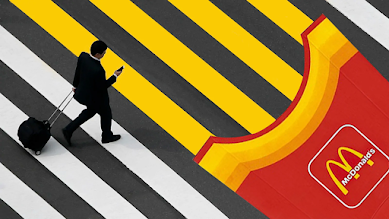 If we compare guerilla marketing to mobile marketing strategy the former one is less cost-intensive,  less in reach of audience, and more suited for small or mid-sized business.
A bit of Creativity: Offline vs Online Classes
Well isn't the above comparison somewhat stands true for the IIM K online vs offline experience. We all will agree the concepts learned while being physically present in the classes gives us the more enriching and indelible experience of teaching pedagogy of IIM K. We are able to retain and recall the concepts by the unconventional teaching style of professors comparatively better in offline classes. But at the same time, the IIM K product in this case pedagogy can be reached to limited students vis a vis let's say if the lectures are relayed online open to all learning enthusiasts out there.
WWF marketing strategy clearly shows that even though the cause is global which may or may not directly impact the targeted audience but still with the right mix of visuals, strong emotions, serving global content in a local way, with limited timeframe campaign and strategic call to action can influence people from across demography.

Popular posts from this blog 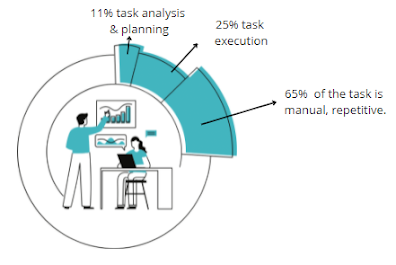 Overview Information is the most important asset for any organization, and the clients across the industry are spending handsome amounts in protecting that. Clients form blue and red teams, which go head-on to ensure the organization's IT infrastructure is cyber resilient. Blue team is a team of security professionals within a Security Operations Center(SOC) whose task is to protect the organization's information and critical assets against any kind of threat. Red team is a team of security professional who tries to break into the systems by overcoming security controls. Understanding Client - SOC SOC consists primarily of a team of security analyst who works together in a 24*7 work environment to detect, analyze, respond, report, and prevents cybersecurity incidents.  A typical SOC infrastructure has IPS/IDS, firewalls, security incident and event management (SIEM), vulnerability scanning engines, endpoint protection tools, and other breach detection tools.   Current Environme
Read more

What is Product Management

October 02, 2020
Product Management  If you are new to product management and looking for the opportunity in this field then you have landed at the right place. Let's begin this journey by getting familiar with what is actually product management( PM ). PM is a role where the candidate has to research the market find the pain points of the users and finally craft the roadmap of how to achieve the final product by working with different teams like UI/UX designer, engineering team, sales representative, and the management of the organization. In simple words, I would say you are giving birth to a product. One in a PM role must have the right balance of soft and hard skills. Soft Skills : Communication Presentation Leadership Hard Skills : Prioritization Analytical Problem Solving Critical Thinking Thought Clarity In the next blog, we will see how to improve on the above skills and the best online courses which are available.
Read more

Learn about FAB - A Game Changer 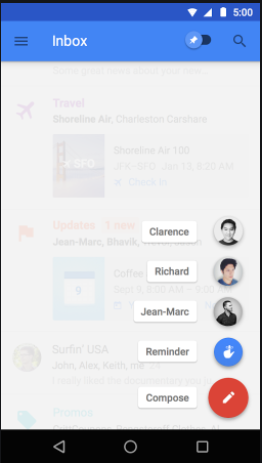 FAB  If you are designing a UI/UX for a digital product you will come across many go to terms and might end up awestruck. Among the many go to terms used while you design UI/UX, I decided to discuss the FAB  and the very reason behind is that it holds a very important strategic position in the whole product. To begin with let's start with the description of the name itself, so FAB stands for Floating Action Button . To give you an example I included a snapshot below where you can the see one of the use cases of FAB . In this use case FAB   is used to give the users a easy way to use the primary utility of the product like setting reminder, composing email etc. Lets see some of the peculiarities of the FAB  : A FAB   represents the primary action on a screen. Design of the FAB  should be relevant to the screen on which it is displayed. It floats to all the screens of the product. Do's and Don'ts  While you use FAB button in your product it is very important to give justic
Read more